At the end of 2017 my husband, Robert, fell into a deep depression and his addiction gained full control of his soul. We made poor choices together and I tried methamphetamine with him. We lost our home, vehicles, belongings, and our marriage wasn’t even hanging on by a single thread. Robert’s addiction took over and he became very abusive. At the end of February 2018 I sought refuge with some friends he introduced me to and left my home, my whole life and everything he and I worked hard to accomplish together. I asked my in-laws to care for our children because I needed to figure out how to fend for myself. In March of 2018 Robert put his hands around my neck and the neighbors witnessed what happened. April 2018 while visiting with our two beautiful children under the supervision of my sister in law; we found out Robert had died of an overdose. We don’t know who he was with or who dropped his lifeless body off at the emergency room but the addiction won.

I became hyper focused on seeking a place to make a new home for me and my kids. I got an apartment in June 2018 but I was unprepared for the custody battle I would face with in-laws to get my kids back. I laid on the floor of my 3 bed room apartment and just wanted to peacefully leave this earth. Three days later I finally got up and went to Walmart. I found myself standing in front of the pregnancy tests. I don’t know what provoked me to purchase a 2 pack but I went home and peed on that stick. Not even a minute later there were 2 lines. I was in shock No way! It was wrong! I woke up the next morning and took the second test. Shockingly that one said positive as well. I ended up taking seven tests and they were all positive.

I felt so much shame. I was embarrassed of my actions. How could I have been so careless? This pregnancy was not from my husband who died 2 months prior but rather from a friend in whom I had sought comfort. I contacted the father and we both decided termination was the most logical thing to do. I made an appointment with the Fort Worth Pregnancy Center to learn about all of my options. I went alone and spoke with a sweet advocate, who presented me an array of information on abortion, adoption, and parenting. She handed me a pretty white box with a big pink bow that said “Love in a Box”. I left my appointment, went to my car and opened the box in the parking lot. Inside there was an invitation to join a group called Embrace Grace— a support group for young women experiencing unintended pregnancies. There was a hand-written note of encouragement and at the bottom a little tiny onesie that said “Best Gift Ever”.

That’s the moment when life chose me.

Through it all I have renewed my relationship with God and He’s using my story to help bring all of His children home. Just as hard as I worked to prove I was fit to be a mother for all of my children; He was showing me that I’m His daughter. Heidi is a blessing from God! She’s the baby we didn’t know we needed!

“For I know the plans I have for you, declares the Lord, plans for welfare and not for evil, to give you a future and a hope.” Jeremiah 29:11 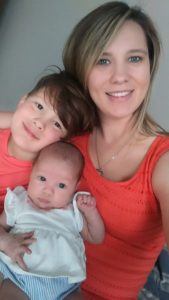 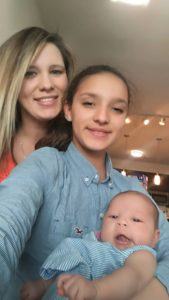 Sign up now for updates on new posts from out blog.

A senior in high school, Chasity had just been kicked out of the house when she found out she was pregnant. With no money and no resources, Chasity felt abortion was her only option.
LEARN MORE